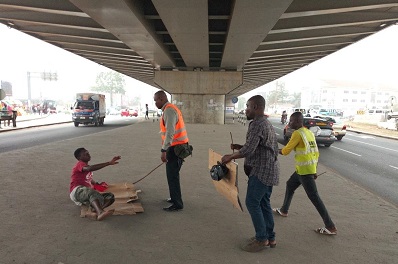 The Accra Metropolitan Assembly (AMA) has intensified efforts to sack mentally ill persons, junkies and beggars, who sleep under the Kwame Nkrumah Interchange in Accra during the daytime.

This follows a report by the Ghanaian Times that about 20,000 mentally ill persons are roaming the streets nationwide, especially in Accra, and Tema.

As of Friday morning, more than 300 of these encroachers had been sacked by an AMA taskforce in the exercise, which started on Monday on a low note.

A supervisor of the taskforce, Mr Kwame Laud, who disclosed the figure to the Ghanaian Times during the exercise, said it would be extended to those who pass the night there.

The Kwame Nkrumah Interchange, completed in 2016, has overtime become a hub for mentally ill people , junkies and beggars and traders.

Some of them have turned the airy space into their homes, where they sleep and eat, creating nuisance and filth while mentally ill persons threaten the lives of passersby.

Efforts in the past to nib the practice in the bud has failed as the encroachers always returned to their new found abode.

But according to Mr Laud, "the ongoing exercise would continue unabated until they no longer come and sleep here".

He said they "definitely have homes and family and should return to them. Those who claim they do not have homes should go to wherever they came from".

Mr Laud said it had not been an easy exercise because some of the mentally ill persons attacked members of the task force.

Asked about the traders, who sold on the payment, he said they were being monitored so that they did not move beyond the boundaries set out for them.

As part of the exercise, the cane bearing taskforce members also carted away the hard paper and rags used as beds.

As of the time of filing this report, the situation had improved.