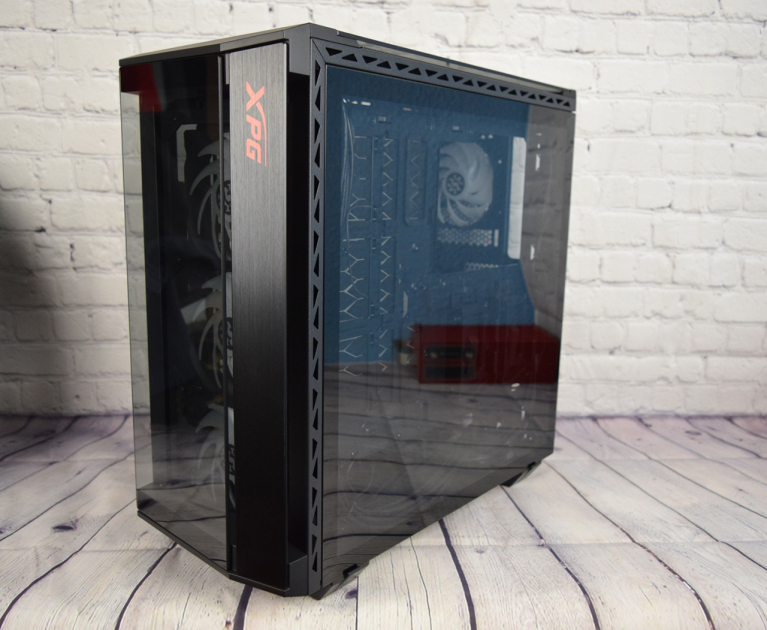 Breaking into new markets is always a gamble for a manufacturer, especially if it's enjoyed success in other segments. Millions can be lost if new products don't sell well. Despite these risks, ADATA has been working to diversify its business, including an expansion into the PC tower case market. I recently reviewed the company's first chassis, the XPG Invader, and found it a worthy first attempt but saddled with a few shortcomings that left it as merely a good case, not a great one. Now comes the XPG Battlecruiser ($199.99), and I'm pleased to say it lives up to its name. This case is ready to take on anything, and walks away with a PCMag Editors' Choice.

Before I dive too far into discussing the midtower case's appearance, I'd like to say that it looks better in person than in the photos here. I've reviewed a lot of cases and typically feel the reverse is true. But the Battlecruiser is different in this regard.

In some ways, the empty XPG Battlecruiser case can come off looking somewhat bare. The external panels -- top, front, left, and right -- are mostly tempered glass, so when you look at it, most of what you see is the steel interior and the thin bits of metal that hold everything in place. Needless to say, things look quite different once you've finished your build.

Another detail that doesn't show up well in the photos is the front panel, which when you view it from top down is actually an obtuse triangle with a broad metal strip down the front of the case. This is much more striking in person, and definitely helps improve the case's unbuilt appearance.

One thing you can clearly see in the photos is the Battlecruiser's excellent ventilation system, with gaps for air to pass through almost everywhere. Most of the intake areas are covered by dust filters. The case also comes with four preinstalled 120mm aRGB fans, which is quite the bonus for LED lovers. If you feel you need more airflow, there's room to add three more 120mm fans at the top of the case and one more at the bottom.

Officially, this case features support for motherboard sizes ranging from Mini-ITX through Extended-ATX (E-ATX). I used an oversize E-ATX board for my build, and the process as a whole was relatively smooth and painless.

The XPG Battlecruiser can hold a total of eight storage devices. On the back of the motherboard mounting tray is room for five 2.5-inch drives, and a cage at the bottom of the case can hold two 3.5-inch drive mounts. Directly above the bottom compartment is one final mounting location, which can host either a 2.5-inch or 3.5-inch drive.

The two 3.5-inch drive bays and two of the 2.5-inch spots use a toolless mounting system. This makes it easy to add or change drives, as you can simply slide them in and out of place. It takes a little more effort than it sounds, as there's a plastic clip in each bay to hold the storage device securely in place, but this only slows down the process a smidge. Adding or removing a drive still takes just a few seconds, as opposed to the minutes required to add a drive using old-school screws (required by the other three 2.5-inch drive mounts and the 2.5/3.5-inch dock).

It's also worth mentioning that the cage that holds the 3.5-inch drives can be removed. This gives you space at the bottom of the case that could accommodate a reservoir for a custom water-cooling system.

A unique aspect of the XPG Battlecruiser is its mounting system for the power-supply unit (PSU), which features a detachable bracket in the bottom rear of the case. To install a PSU, you first remove this bracket and mount it to the PSU separately. Next, you slide the power supply into the back of the case, which differs from most other chassis that require you to slide the PSU in through one of the side panels.

This is the third case I've tested that uses this innovative mounting system. ADATA's XPG Invader has an identical mounting bracket (you could swap brackets between the XPG cases, not that there's any reason to). Case maker Be Quiet has opted for a similar mounting system as well, though that implementation proved problematic.

The Battlecruiser's PSU mounting system works without issue, but there are a few pros and cons. On the negative side, the design doubles the number of screws required to mount the PSU from four to eight. On the other hand, it makes mounting the PSU easier to my eyes, as more traditional mounting systems often make lining up the PSU with its screw holes in the case somewhat tricky -- and also require you to hold the power supply in place with one hand while screwing it secure with the other. ADATA's system may take slightly longer, but the process is frustration-free.

Last but not least, before moving on to the building portion of this review, what I'm tempted to call the XPG Battlecruiser's front panel actually sits on top of the case. This port panel contains two USB 3.0 Type-A ports and a single USB 3.1 Type-C port along with the usual power and reset buttons and an audio jack. There's one additional button that's used to adjust the built-in RGB LEDs.

As I said, the main compartment of the case where the motherboard gets mounted is exceedingly spacious. Mounting an E-ATX board was quick and easy, as was attaching most cables.

I went a step further in testing this case than I normally do by installing a CLC water cooler. I typically avoid using all-in-one liquid coolers due to the extra hassle of getting the large radiator and fans mounted, but I needed to prep an AMD TRX40 motherboard for review, so I made an exception.

Initially, I had concerns about fitting the large radiator at the top of the case as it left little room between the cooler and the motherboard's VRM thermal solution. The mounting bracket for the cooler is unrestrictive, however, and you can adjust any fans or radiators mounted here by a few inches in any direction to make it fit. In my test system, I was forced to mount the radiator as close to the left panel, away from the large VRM heatsinks, as possible.

Before mounting the radiator at the top of the case, I considered the idea of mounting it up front instead. Ultimately, I decided not to do so, but investigating this option was informative.

Accessing both of these mounting locations is easy; the top and front glass panels are held on by two screws apiece and slide right off after these are removed. As mentioned earlier, three fans come pre-installed on the front of the case, but it's worth noting that the bracket the fans are screwed into is identical to the one at the top of the case. This means that had I opted to install the radiator in the front, I could have just unscrewed and swapped the two brackets without unscrewing all of the cooling hardware.

The design choice to make these brackets interchangeable is helpful, especially if you're working with a CLC cooler as I was. If you opt to do this, however, be careful to watch the direction your system's air is flowing so you don't accidentally create a heating issue.

Installing most other components within the Battlecruiser went about the same as normal, with a few minor caveats. First, this case supports mounting the graphics card vertically as well as horizontally if you like. Second, connecting devices to the motherboard's headers is slightly problematic. It's not really more difficult, but the case has relatively few cable pass-through slots at the bottom of the motherboard mounting tray. There are a couple near the middle and front of the case, but none in the back.

This forces you to run the front HD audio connector and USB cables through pass-through slots a few inches away, but that's really just a minor problem. It only affects the headers on the very bottom of the board, and the end result still looks fairly clean. At this point, however, I should mention the ADATA case is somewhat lacking in cable management features, which resulted in my finished build looking a bit messier than usual.

After thoroughly taking apart and reassembling this case with a freshly built PC inside, I find little to complain about with the XPG Battlecruiser. It has a few unfamiliar features such as the PSU mounting system, but the only real issue I encountered while building my system was the shortage of cable pass-through slots at the bottom of the case. The building experience was also relatively quick and in some ways easier than expected, thanks again to the PSU mounting system and spacious interior.

Listed at $199.99 (discounted to $179.99 on ADATA's site at this writing), the Battlecruiser also feels appropriately priced against its competition. Overall, the case is excellent and well-made, inspiring a rating of 4.5 stars -- not perfect, but close to it.