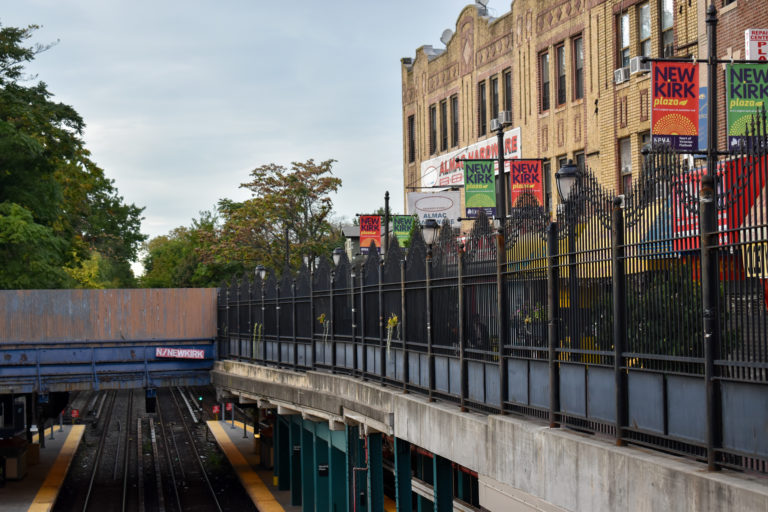 Brooklyn Borough President Eric Adams, with the support of other elected officials and Flatbush Development Corporation, is calling on Mayor Bill de Blasio to solidify who is responsible for Newkirk Plaza, the oldest outdoor shopping plaza in America.

Newkirk Plaza, home to the Q and B trains and dozens of businesses in Ditmas Park, Brooklyn, is currently unclaimed.

Neither New York City nor The Metropolitan Transportation Authority will take ownership of the area, creating a lack of management, funding, and safety. Nearly two years ago, the City and the MTA met to resolve the issue, but were unable to reach an ultimate solution that persists to this day. Since then, the plaza has been subject to temporary agreements between these agencies, with no final answer in place.

In a letter to de Blasio dated January 29, Adams referenced this meeting, saying, "As a result of this intractable disagreement, concerns regarding maintenance and responsibility of the plaza continue unabated, and a growing rat population, as well as unaddressed street homelessness needs, are posing challenges that business owners, the 70th Precinct of the New York City Police Department (NYPD), and local government entities continue to work together to address."

"For decades Community Board 14 has urged the City to take responsibility for Newkirk Plaza so that enforcement issues, maintenance needs and the ability to program public events and create a lively public space can be realized. We are pleased that Borough President Adams values public access to public space and is championing the cause," Ed Powell, Chairman of Community Board 14, told Bklyner in a statement.

This letter comes as merchants are considering hiring private security for Newkirk Plaza, following an increase in crime and a decrease in NYPD presence. Supported by Council Member Dr. Mathieu Eugene, the move would cost a few thousand dollars, split between merchants and neighborhood associations. The man calculating these numbers, Newkirk Plaza Merchant Association President Javi Saez, has been in the middle of the state agencies' ongoing discussion for the past several years.

Saez is one of the merchants in the area who has picked up responsibilities that would belong to either the City or the MTA, such as cleaning the open space and funding community events, like their annual Christmas holiday bash for the neighborhood.

Giving the plaza a permanent owner could also help bolster economic development in the area, the letter said. Community Board 14, Adams explained, has a higher average poverty threshold (21.5%) than both New York City (19.8%) and Brooklyn (20.9%).

To alleviate some of these issues, the letter suggested adding the plaza to the Department of Transportation's Pedestrian Plaza Program. The program, as explained on their website, aims "to create neighborhood plazas throughout the City to transform underused streets into vibrant, social public spaces." This could be particularly advantageous for Community District 14 (that serves Flatbush, Midwood, and parts of Kensignton), where the plaza is located, because it has the worst access to public and green space in all of Brooklyn and Manhattan, and the 4th worst citywide, according to NYC Planning.

"We at FDC have always believed that Newkirk Plaza has incredible potential and is now primed for the DOT Plaza program. This designation would ensure proper investment and turn Newkirk Plaza into a vibrant cultural public space that highlights our small businesses, and attracts new businesses," she said in an email to Bklyner.

In addition to the DOT's Plaza Program, Adams' office said that it wants a wide answer that focuses on the management of the plaza first.

"We believe the City must take a multi-agency approach to addressing these myriad issues, which begins by resolving the ongoing disagreement between the City and the MTA over who is responsible for governing and maintaining the plaza," Adams' office wrote in an email.