microRNA-378a-5p iS a novel positive regulator of melanoma progression 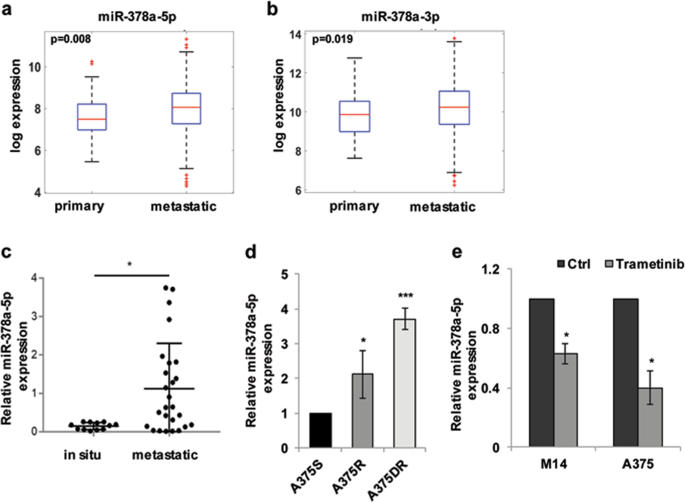 We firstly evaluated the expression levels of miR-378a-5p and miR-378a-3p in a large melanoma patient cohort from The Cancer Genome Atlas (TCGA) database. As shown in Fig. 1a, b, both miRNAs were significantly upregulated in metastatic melanoma when compared to primary melanoma. Motivated by the lack of any data on the role of miR-378a-5p in melanoma pathobiology, we focused our attention on the biological functions of this miRNA in human melanoma. As reported in Fig. 1c, the expression of miR-378a-5p was significantly higher in melanoma specimens from our Institute compared to melanoma in situ. We also found an increased miR-378a-5p expression in the A375 melanoma cells resistant to Vemurafenib (BRAF inhibitor) or to Dabrafenib/Trametinib (BRAF/MEK inhibitors) compared to sensitive ones (Fig. 1d). Interestingly, while exposure to Dabrafenib did not affect miR-378a-5p expression (data not shown), the treatment with Trametinib significantly reduced its expression in both M14 and A375 cells (Fig. 1e).

As observed in other tumor histotypes, miR-378a-5p overexpression induced a significant increase of both migratory and invasive capacity of M14, A375, and SBCL1 melanoma cells (Fig. 2a, Supplementary Fig. 3), as well as an increased expression of Metalloprotease-2 (MMP2) (Fig. 2b), which is a key metalloprotease involved in melanoma progression.

We further analyzed the involvement of miR-378a-5p in vasculogenic mimicry (VM), an alternative way to provide tumor blood perfusion. As reported in Fig. 2c and Supplementary Fig. 4, the formation of channel-like structures, evaluated in terms of number of intersections, was augmented in M14 and SBCL1 melanoma cells overexpressing miR-378a-5p, compared with control cells.

We also evaluated whether miR-378a-5p was able to affect the expression of uPAR a very critical regulator of migration, invasion and VM. The modulation of miR-378a-5p in melanoma cells shows a significant regulation of uPAR expression at transcriptional (Fig. 2f) and protein (Fig. 2g) level.

Our data together with the ability of uPA/uPAR axis to function as a degrader of extracellular matrix and a regulator of migration, invasion and VM, are indicative of a possible involvement of uPA/uPAR axis in miR-378a-5p-induced in vitro tumor-promoting functions. To investigate the relevance of uPAR in the ability of miR-378a-5p to affect in vitro properties associated with melanoma aggressiveness, a specific small interference RNA smart pools (si-uPAR) able to reduce uPAR expression (Fig. 4a) was used after miR-378a-5p mimic transfection. As reported in Fig. 4b-d and Supplementary Fig. 5, 6, uPAR silencing strongly reduced miR-378a-5p ability to increase in vitro cell migration, invasion and VM, when compared to the relative control.

Through its interaction with integrins, we previously reported that uPAR is able to affect melanoma invasion, migration and response to therapy. We also demonstrated that the M25 linear peptide was able to uncouple uPAR from integrins thus affecting its functions. On the basis of these evidences, we reasoned that inhibition of uPAR functions with M25 peptide could produce functional effects similar to those obtained with uPAR silencing by means of si-uPAR. As reported in Fig. 4b, c and Supplementary Fig. 5, M25 peptide strongly reduced miR-378a-5p-induced migration and invasion, when compared to cells treated with the relative control peptide.

As reported in Fig. 2d, the secretion of the proangiogenic factor, VEGF, was significantly increased in melanoma cells after miR-378a-5p overexpression. Moreover, miR-378a-5p is exported from lung cancer cells in exosomes and the secretion of this miRNA has been reported to correlate with miR-378a-5p expression by the cells. Thus, we investigated whether miR-378a-5p was able to affect the in vitro and in vivo angiogenesis. As shown in Fig. 5a, b, human umbilical endothelial cells (HUVEC) seeded on Cultrex BME and exposed to conditioned medium (CM) derived from M14 cells overexpressing mimic miR-378a-5p, formed a significant increased number of tubular-like structures when compared to cells exposed to CM from control cells. In agreement with the in vitro results, matrigel plugs containing CM from mimic miR-378a-5p overexpressing M14 cells injected in C57Bl6 mice, showed a higher co-option of surrounding vessels and about 4-fold induction of the haemoglobin content when compared to the matrigel plugs containing CM from control cells (Fig. 5c, d).