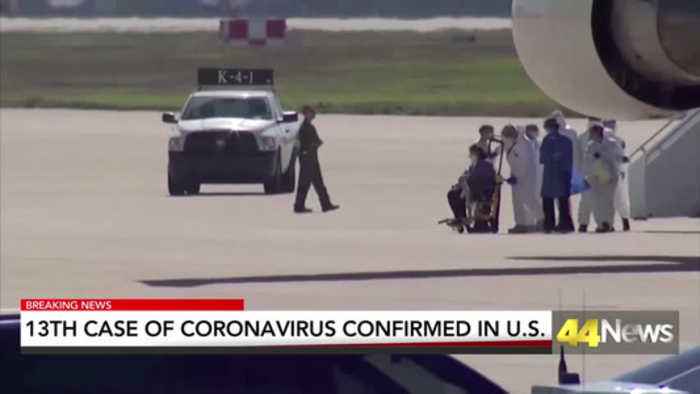 The cdc is confirming a thirteenth case of coronavirus in the ?s, this time in san diego.

The patient was on a governmen?

Chartered flight last week from wuhan, the chinese city at the center of the outbreak.

Carter evans is outside march air reserve base in california, where the first americans to arrive from wuhan are set to be released today from quarantine.

(sot: ian thompson/ quarantined traveler from michigan)"the confidence level from the cdc is that none of us have got it."

Track 1ian thompson is ready to get back home to his family in detroit.it's been two weeks since he landed back in the ?s from the epicenter of the coronavirus outbreak.

(sot: ian thompson/ quarantined traveler from michigan)we get a document signed by the cdc as part of the process of going out.

That's given to us so that we can show it to anybody to show we don't have the virus.

Track 2but not everyone who flew back from wuhan was so lucky.yesterd ay the 13th ?s case was confirmed in san diego?

A patient who arrived on a ?s chartered flight last week.around the world, fears of transmitting the coronavirus are growing by the day.

(nat) train announcement track 3in beijing, an eerie emptiness set in during morning rush hour.officials there ordered citizens coming back from epidemic zones to quarantine themselves for at least two weeks.in hong kong, authorities evacuated a residential hig?rise after two tenants who live on different floors contracted the virus.

Thousands of others remain quarantined at military bases.

Track 4and on cruise ships like the diamond princess docked in japan, which has been on lockdown for a week.the world health organization is now*on the groun* in china.it will assemble a team of global scientists this week in an effort to speed up the development of treatments and vaccines.

(sot: tarik jasarevic/world health organization?wha t really is important, rather than making predictions, is really to work hard to try to get solutions?

(standup close: carter evans/cbs news/moreno valley, california?the cdc is still testing nearly 70 people here in the ?s who are suspected of having the virus.

That includes another person in san diego who arrived on that flight from wuhan who's now exhibiting symptoms?